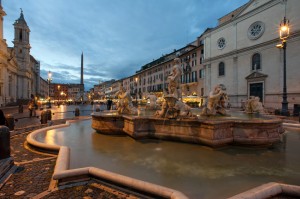 Fountains and squares: Spanish steps, the 18th century Trevi fountain where tradition wants you to throw a coin into the water in order to come back to the eternal city; the Pantheon, one of the largest surviving temples of Rome, almost 2000 years old; Campo De’ Fiori and its colorful market, Navona square, once a stadium during Domitian, since the 17th century embellished with the most celebrated fountain of the four rivers realized by Bernini and representing the Nile, the Gange, the Danube and the Plate. …and in between, why not, a good gelato as a refreshing break and a quick glance at Via del Corso with its hundreds stores scattered along almost one mile of busy and hectic street.